While I was at GDC I had the pleasure of attending the Rendering with Conviction talk by Stephen Hill, one of the topics was so cool that I thought it would be fun to try it out.  The hierarchical z-buffer solution presented at GDC borrows heavily from this paper, Siggraph 2008 Advances in Real-Time Rendering (Section 3.3.3).  Though I ran into a fair number of issues trying to get the AMD implementation working, a lot of the math is too simplistic and does not take into account perspective distortions and the proper width of the sphere in screen space so you end up with false negatives.

You should read the papers to get a firm grasp of the algorithm, but here is my take on the process and some implementation notes of my own. 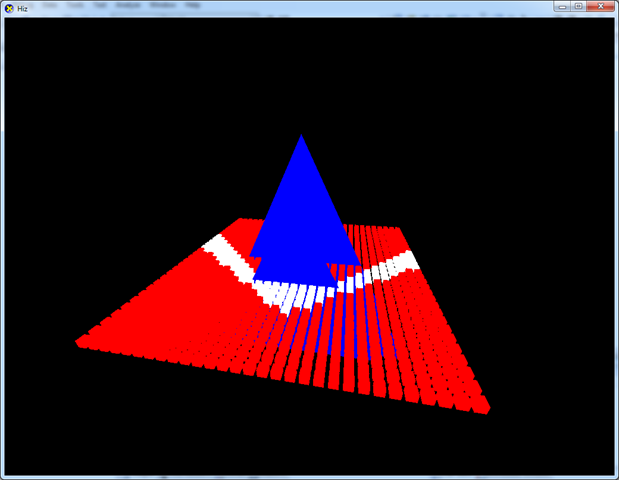 The downsampling is pretty much what you would expect, you take the current pixel, sample one pixel to the right, bottom and bottom right.  You take the furthest depth value and use it as the new depth in the downsampled pixel.  Here’s an example of a before and after version, black is a closer depth, the whiter a pixel is the further away / higher the depth value.

Here’s the heart of the algorithm, the culling.  One note, [numthreads(1,1,1)] is terrible for performance with compute shaders.  Anyone planning to use this should do a better job of their thread group and thread management than I did. This is the DX11 compute shader version, I decided to use it here since it’s clearer what the intentions are. You’ll find the DX9 code in the full sample at the bottom of the post.

Here’s my sample implementation of the Hierarchical Z-Buffer Culling solution in DX11 and DX9.  Some notes, during one of my iterations I disabled the code for rendering a visible representation of the occluders which are just two triangles hardcoded in a vertex buffer to be rendered every frame.  Also, DX9 doesn’t actually render anything based on the results.  I was just using PIX to test my output of the cull render target and was more focused on getting it working in DX11.  The controls are the arrow keys to move the camera around.  Red boxes represent culled boxes, white boxes are the visible ones.

I haven’t quite figured out how to deal with shadows.  I’ve sort of figured out how to cull the objects whose shadows you can’t possibly see, but not really.  Stephen mentions using a tactic similar to the one presented in this paper, CC Shadow Volumes.  I wasn’t able to figure it out in the hour I spent going over the paper and haven’t really found the time to revisit it.

I’ve added a new post on how to solve the problem of culling objects that cast shadows.

I’ve been doing some additional research into generating occluders. It doesn’t completely solve it, but it’s a start. Further work is needed.

I’ve started a project to automatically generate the occluders to be used with Hi-Z occlusion culling, Oxel!