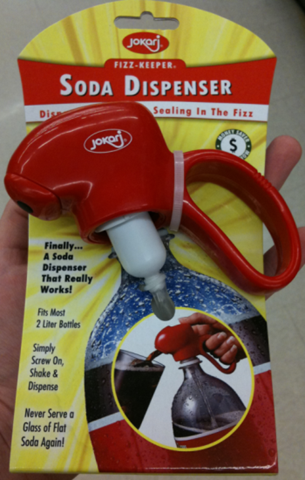 When working on tools or any software in general really; it’s important to remember not to over engineer or attempt to solve problems that don’t exist.

I was walking through the grocery store last night and happened across this glorious feat of over engineering.  The Soda Dispenser.

It’s a device that you screw on to the top of a soda bottle, shake the bottle and then the resulting pressure forces the liquid up through a plastic tube that’s inserted into the bottle.  You then simply press the button at the top to release the liquid.

This is definitely an attempt to solve a problem that simply doesn’t exist and their solution is terrible.  After you get about half way through the bottle, I imagine there wont be enough pressure to force a lot of liquid out.  At around 25% almost nothing will come out and you’ll have to resort to unscrewing the Soda Dispenser and pouring your carbonated beverage into a glass like a cave man.