After learning a lot about integrating tools into Visual Studio (2008/2010), I’m happy to announce a new version of my WPF ShaderEffect Generator tool.  (ugh, I really need to come up with a shorter name).

As before the newest version can be downloaded at CodePlex [here].

I was pretty thrilled to see about 100 downloads of the 1.0 version of the tool.  I figured it would be pretty niche and so I wasn’t expecting nearly that many downloads in such a short time.

The new version supports different profiles of shader compilers and has a pretty solid integration with VS2010.  Which I’m happy to say is far easier and better than what is still required for VS2008 and lower.  No longer do Visual Studio extensions require crazy and obtuse registry values be tweaked.  Now it’s only a matter of running a vsix installer file.  Optionally, if you’re installing it using a classic installer (as is my case since I support VS2008 and VS2010 from one installer), all I needed to do was drop the finished extension into a Visual Studio 2010 directory and it handled the rest.  Uninstalling was just as easy, all I needed to do was have the uninstaller remove the files from the directory I placed them in.

Here’s what the new extension manager looks like in VS2010, it’s pretty nice. 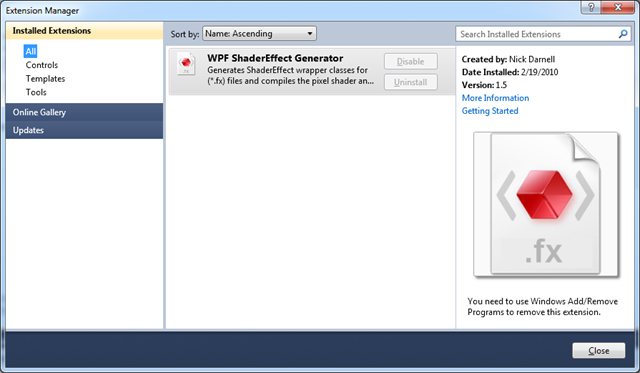